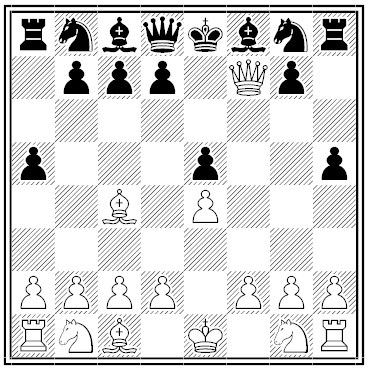 Mike Keith published this remarkable invention in the Journal of Recreational Mathematics in 1975. Suppose a chess game goes:

This is checkmate, so White says “I win!” Now if the game score is written out in one column, including White’s exclamation:

… we get a solvable alphametic — replace each letter (and the symbols x and -) with a unique digit and you get a valid sum. (The digits already shown count as numbers, and those numbers also remain available to replace letters.)

This example isn’t quite perfect — the two moves P-R4 are ambiguous, as is the final pawn capture. Keith’s Alphametics Page has an even better specimen, a pretty variation from a real 1912 game by Siegbert Tarrasch. It’s 13 moves long and forms a perfect alphametic with a unique solution.