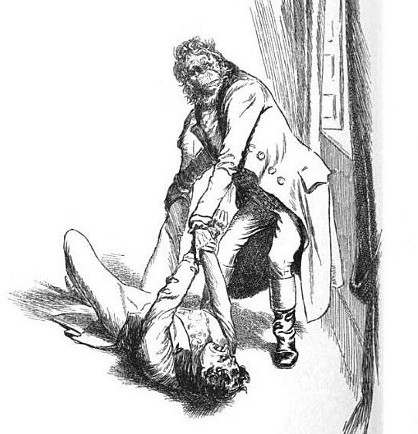 Should other species be regarded as human? In 1779 Lord Monboddo proposed that orangutans should: They walk upright, use weapons, form societies, build shelters, and behave with “dignity and composure.” “If … such an Animal be not a Man, I should desire to know in what the essence of a Man consists, and what it is that distinguishes a Natural Man from the Man of Art?”

Thomas Love Peacock mocked this view in his 1817 novel Melincourt, in which a civilized orangutan (“Sir Oran Hout-ton”) is elected to Parliament. And an anonymous wag objected even to the satire:

The author of a novel lately written,
Entitled “Melincourt,”
(‘Tis very sweet and short),
Seems indeed by some wondrous madness bitten,
Thinking it good
To take his hero from the wood:
And though I own there’s nothing treasonable
In making ouran-outangs reasonable,
I really do not think he should
Go quite the length that he has done,
Whether for satire or for fun,
To make this creature an M.P.
As if mankind no wiser were than he.
However, those who’ve read it
Must give the author credit
For skill and ingenuity,
Although it have this monstrous incongruity.

But today Monboddo’s view is on the ascendancy. In Rattling the Cage (2014), Harvard legal scholar Steven M. Wise argues that orangutans — as well as chimpanzees, bonobos, elephants, parrots, dolphins, and gorillas — deserve legal personhood. “Ancient philosophers claimed that all nonhuman animals had been designed and placed on this earth just for human beings,” he writes. “Ancient jurists declared that law had been created just for human beings. Although philosophy and science have long since recanted, the law has not.”